Hidden Peaks Coffee & Roasting is a family owned business established by Roger Hansen, aka “Roger the Roaster,” in 1989. Hansen had a previous career working for hotels, but after a semi-retirement, he decided to pursue his longtime passion for roasting coffee. Taking the initiative to follow his dream, he spent two weeks training in Oregon at the the Sivetz Coffee Roasting Machine Plant, where he purchased a Sivetz Roaster.

Back in Salt Lake City, Roger began roasting for friends, and selling wholesale to local distributors. In 1994, Hansen was joined by his son Derek, who says, “Roger was roasting and selling ‘fresh roasted’ gourmet coffee, and I had the vision to see his great product sold on a larger scale—the match was a perfect combination.” 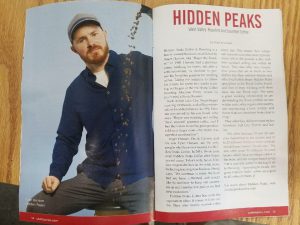 Roger Hansen, Derek Hansen, and his son Tyler Hansen, are the only people who have ever roasted for Hidden Peaks Coffee. In 2014, Derek took over Hidden Peaks Coffee after Roger passed away. Tyler’s wife, Sarah, handles responsibilities in the retail store, including training new baristas. Derek says, “We continue to enjoy the local feel we have cultivated, and would like to continue to keep our customers as our number one goal as we find new customers.”

Hidden Peaks Coffee has quite the reputation when it comes to their coffee. They offer freshly roasted coffee every day. This means their wholesale network and retail store typically roasts 200 to 400 pounds a day, with their product selling out within 48 hours. They also offer very competitive prices that are as much as two dollars less than national brands and other local coffee shops. Hidden Peaks specializes in the Royal Coffee brand, and they’ve been working with them since day one. Derek says, “We have a great working relationship in understanding the flavor profiles we like within each coffee region and country, and maintaining a taste, acidity, and flavor that are consistent from crop to crop.”

“We offer between 15 and 20 varieties depending on the season; and 15 to 20 different blends of those varietals and different roasts,” Derek says. “We also offer some 30 different flavored beans, which have an extract added to the bean, and not a sugar-based syrup that is typically added to the liquid after brewing.” According to Derek, this gives Hidden Peaks’ coffee an appeal to all coffee drinkers.

Read about us here